It never ceases to happen . . . anytime I serve a dish with french bread as an accompaniment, I always have a ton of bread leftover!  Good thing there are delicious recipes that require day old bread!

I’m not a huge fan of desserts, but one of my favorites is Bread Pudding!  Food historians have traced the history of bread pudding to the early 11th and 12th centuries, as frugal cooks looked for ways to use stale, leftover bread instead of letting it go to waste. In 13th century England, bread pudding was known as “poor man’s pudding,” as it was a popular dish with the lower classes. (Jan 23, 2008)

It has always reminded me of a sweet version of stuffing!  I hope you don’t think I’m just going to give you a Plain Jane bread pudding recipe!  🙂

I just CUCed it again!  Think of it as a Tres Leches Bread Pudding . . .I promise you will never use just ONE milk again!  The recipe is still simple and you will never waste leftover bread again! 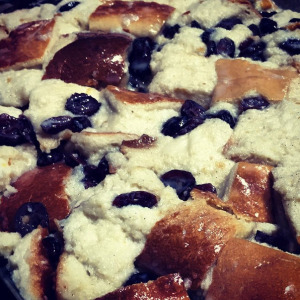 4 thoughts on “Not Your Grandma’s Bread Puddin’!”

Link Me to It!